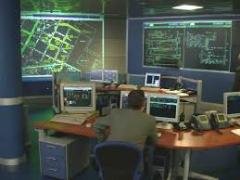 The Control Room of Iren, established in Parma (Italy), has been recently built as a modern 'control tower' of the energy services provided by the Iren Group. The Control Room guarantees a prompt H24 service.

The Control Room receives either calls from customers who report network failures, or signals from the controlled network segments, with the relevant data being subsequently being displayed on the synoptic system on the giant monitors as well as the monitors of the operators.

The communication between the customers and the Control Room is managed by a specific group of the Control Room operators (Call Center), which is assigned to the collection of the information of each emergency call. When is necessary the operators are requested to assign the intervention to the technicians in the field (as represented in Figure 1).

The AdCoS developed in HoliDes focused on the communication between the operator and the operational teams in the field, and this specific use case has been selected because we expect it to get the most benefit from the adaptation of the communication strategy and the inclusion of Human Factors in the development process since the very beginning.

The Android app for the technicians (Figure 2) lets them accept the assignment of an intervention and access the corresponding data (type of intervention, address, etc.).

The HMI application for the Control Room operators (Figure 3) is a web-based application that lets them access the list of interventions, assign an intervention to a specific technician (according to the priority list provided by the Decision Algorithm) and see which technician is in charge of which interventions. We designed a web-based interface to be easily accessible on different devices because the operators of the Control Room use different applications and operating systems (mainly Windows and UNIX).

Figure 2 – A detail of the Android app for the technicians

Using the Task Analysis techniques, we designed the applications by mainly focusing on the automation to optimize the allocation of the technicians in the field. However, the operators of the Control Room raised concerns about their trust in the automation (“How can I trust the decision-making process of the system?”)

Therefore, during the design phased, by taking stock of the comments of the operators, the HMI concept has been improved by including features that cope with the sharing of authority issue, to share knowledge and increase trust in automation. In particular, the “Check button” has been introduced, as well as the representation of the Decision Algorithm steps to clearly and intuitively show how it works.