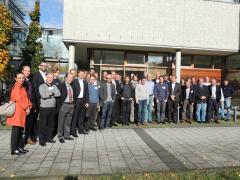 From 22 to 24 October, HoliDes project’s kick-off meeting was successfully held on Berlin. All consortium partners were present and formally introduced. Dr. Andreas Ludtke welcomed the partners warmly to the meeting and the HoliDes project officially commenced. The project idea and its background was presented and discussed. Partners, who are leaders of work packages in this project, reported shortly about the content of their work package and their ideas of the first steps were addressed. The first meeting day ended with a social event in Kopenick. On the following days, the remaining work packages were presented and also discussed. The atmosphere at the meeting was relaxed and full of excitement of the project.