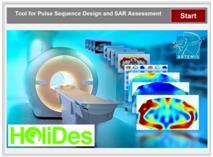 The University Medical Center Utrecht is the second largest hospital in the Netherlands. It is high ranking in a wide range of research fields among which magnetic resonance imaging (MRI) technology. Its radiology department disposes over 12 MRI systems one of which is an ultrahigh field research system with a permanent magnetic field strength of 7 tesla (versus 1.5 or 3 tesla for regular systems). Imaging at this field strength comes with a multitude of scientific and technological challenges. One of these challenges has been addressed by the Safe Parallel Transmit Scanning AdCos considered in the HoliDes project. For many anatomical regions, 7 tesla imaging requires the use of a so-called ‘parallel transmit’ antenna array. The array consists of a set of antennas (in MRI mostly called ‘coils’) that emit the radiofrequency (RF) signals into the patient. This radiofrequency field will excite the atomic nuclei that, after relaxation, will emit radiofrequency signals that are detected to generate the image. A set of RF amplifiers, each connected to the coil array elements (antennas), provides the required transmit field. Each channel is independently modulated: optimal phase, frequency and amplitude modulation should lead to the required excitation of part of the patient, e.g., homogeneous (same signal from all parts of the brain), or spatially focused (only signal from the spinal cord).

However, this temporal modulation of the RF signals alters also the spatial interference of the concomitant electric fields resulting potentially in unsafe RF induced tissue heating (microwave heating effect) at certain body location. The electric fields and heating cannot be detected directly with MRI and their spatial patterns are highly patient specific due to the complex electromagnetic interaction of RF signals with the human body. The spatial heating pattern can only be determined by means of electromagnetic simulations employing dielectric models of the scanned subject. In this way, the spatial peak temperature can be calculated and power levels can be adjusted to avoid peak temperature levels from rising above safety thresholds. However, often the models that are used for electromagnetic simulations do not well represent the features of the subject under examination, and thus the assessment could be inaccurate.

Figure 1. Relation between various calculated maps of field in the patient

Tissue heating is often characterized by the power absorbed in the tissue, divided by the tissue density. This is called ‘specific absorption rate’ (SAR) expressed in W/kg. Safety guidelines are expressed as maximum SAR levels. Currently it is still not possible to perform a real time assessment of the SAR distribution using subject-specific online-generated models of patients undergoing MRI. For this reason we believe that the best solution is to build a database with many different models and to use it for real time SAR prediction. However the MRI technologists rarely have the required knowledge to use appropriately a similar database, therefore it is equally important to design an AdCoS with an intuitive interface that enables non-scientific staff to be able to perform safe parallel transmit scanning.

Before HoliDes, the UMC did not yet evaluate the wide range of inter-subject variability and therefore large safety margins were used with consequently long scan times. As soon as the HoliDes project started, by following the pipeline shown in Figure 2, many models were built to be stored in the database and a preliminary prototype of interface was designed.

In line with the HoliDes project, different initiatives were taken to improve the design of the AdCoS interface by including HF considerations. In particular, an iterative design has been planned leveraging empirical analysis of cognitive and communication processes techniques and the HF-filer tool, all included in the Human Factors – Reference Technology Platform (HF-RTP), with the goal of evaluating and improving the HMI suitability to expert and non-expert users. Hence, the human factors data have been collected and tracked by means of HF-filer to be included into the system engineering workflow at the same level as other more technical development information. Different HF-issues have been detected thanks to that analysis: for example, it has been detected that there were too confusing information displayed on the interface according to the non-expert users, and some misinterpretation of the sequence of steps to be performed during the calibration activities. HMI design solutions have been derived accordingly to reach both ease of use and suitability for non-expert users of the new version of the interface, following the procedure derived in the HoliDes project. The results of the analysis recorded a clear improvement of the final product.