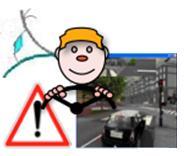 We aim to support the virtual design process of future AdCoS for Automotive in charge of monitoring risks due to visual distraction. In this context, the challenging design issue in HoliDes is to develop an integrative platform interfacing (1) a human driver model (using a “virtual eye” for road scene scanning) able to drive (2) a virtual car equipped with (3) a virtual AdCoS, for progressing in (4) a virtual road environment. From this approach, it is expected to better integrate end-users’ needs in the design process: that’s why we called such an integrative architecture “Virtual Human Centred Design (V-HCD) platform”..

Figure 1 provides the platform overview. Actually, the V-HCD platform resembles an example of a tailored Human Factor – Reference Technology Platform (HF-RTP) dedicated to the automotive domain, developed in HoliDes to the aim of supporting the virtual design of advanced adaptive and cooperative driving aids.

The actual human-centred part of this integrative platform is represented by the COSMODRIVE model (COgnitive Simulation MOdel of the DRIVEr), on the right part of the figure. COSMODRIVE is in charge of simulating human drivers’ visual strategies, cognitive processes and driving behaviours (including errors). This driver model is able to drive a virtual car in a 3D road environment simulated with the Pro-SIVIC® software (see the left part of the figure). Pro-SIVIC® is also used to simulate car embedded sensors that are connected, by means of RTMaps, to a virtual AdCoS. RTMaps (the core of the figure) is a software allowing to easily and efficiently interconnect data streams of the different tools and models, such as simulators, car sensors or actuators, simulated HMI or end user models, already introduced in the above newsletter sections. As it can be seen, the AdCos considered by the V-HCD platform involves a set of virtual Advanced Driver Assistance Systems (virtual ADAS) developed by IFSTTAR with Pro-SiVIC® Research. Examples of the considered virtual ADAS are Collision Mitigation/Avoidance systems, Lane Keeping Assistant and Lane Change Assistant. Besides the aforementioned ADAS, there is the MOVIDA module (MOnitoring of VIsual Distraction & risks Assessment). MOVIDA is in mainly in charge of monitoring and assessing the driver behaviour and the current situational risk. Thanks to such a functionality, it is possible to have the AdCos interacting with the driver in an adaptive and cooperative way, i.e., according to the situational risk and driver’s errors. In a virtual simulation environment, the driver is represented by means of the COSMODRIVE model. When using a driving simulator, the driver is the actual simulator user.