As the European Council has adopted the council regulation on ECSEL in their meeting of May 6, 2014, ESCEL-Joint Undertaking will become reality soon. The formal date for the launch of the first call for project proposals will be July 9, 2014.
To prepare for this call, the shadow ECSEL Joint Undertaking organises a Consortium Building Event that will take place on June 5, 2014 at Autoworld, Brussels. The Consortium Building Event 2014 is organised by the ARTEMIS and ENIAC Joint Undertakings to help consortia to build solid project proposals and particularly to encourage project proposals aiming to exploit the synergy among the various disciplines in ECSEL. This event is a combined follow up of the (pre)brokerage events that have been organised by AENEAS, ARTEMIS-IA, and EPoSS for their respective communities earlier this year.

The Sixth International Conference on Advanced Cognitive Technologies and Applications 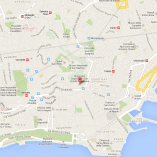 07/05/2014
Suor Orsola Benincasa University
Important instructions for the Third General Assembly In order to help the participants to the Holides Meeting in Naples to find a suitable accommodation and to organize their journey accordingly, you’ll find attached the hotel list +map to reach the Suor Orsola Benincasa University
26/04/2014
Metro Toronto Convention Centre in Toronto, Canada
CHI 2014

Celtic-Plus will run its next annual Event from 23 and 24 April 2014 at Grimaldi Forum in Monaco. The Event is considered as important occasion to show the achievements of Celtic projects and to discuss current and new challenges with important people from industry and research. The collocation with WIMA allows additional opportunities to establish new contacts and to discuss new activities with experts and organizations of closely related technological areas. The Event will be attended by around 200 experts and decision makers from industry and politics.

Home
The 23rd Conference on Behavior Representation in Modeling and Simulation (2014) will be held at the University of California, DC campus in Washington, DC from April 1 to April 4, 2014. BRIMS-2014 will be co-located with SBP.
Registration is now open for SBP14, the 2014 International Conference on Social Computing, Behavioral-Cultural Modeling, and Prediction. Registering will also include registration for BRiMS 2014. BRiMS 2014 will be held at the UCDC Center, downtown Washington DC, USA April 1 – 4, 2014.

DATE combines the world’s favorite electronic systems design and test conference with an international exhibition for electronic design, automation and test, from system-level hardware and software implementation right down to integrated circuit design